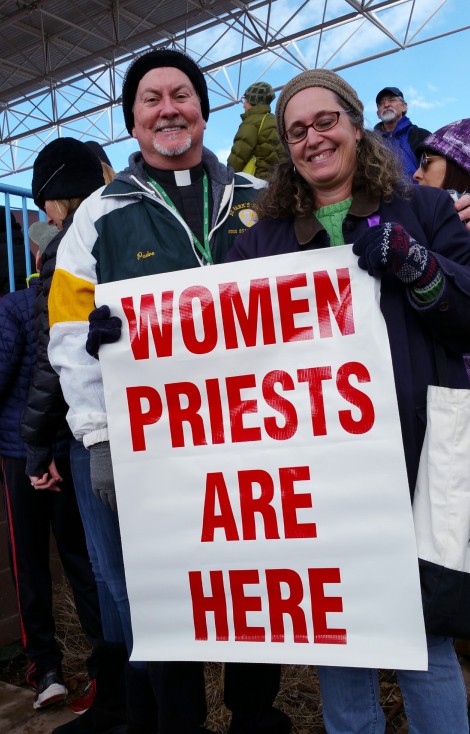 I am a priest of the diocese of Wilmington, Delaware.  I am currently on a medical leave of absence, driving across the country on a labyrinthine journey towards “healing,” headed (I think) to Los Angeles, California for multi-level cervical fusion.  Due to multiple road-blocks and unexpected weather changes, I find myself having to stay in Albuquerque, New Mexico.  As a long-time friend and student of the Franciscan Father Richard Rohr, I’ve been to ‘the Land of Enchantment’ many times.  So, this is not an unwelcome geography in which to find myself “stuck.”

Had I been in my home diocese today, I would have gone to the Women’s March on Washington with several feminist friends.  So, what will Albuquerque offer on this day?  I read online that a Rally would begin at 11 a.m. today at the Civic Plaza.   I knew that I would go.

But I debated what to wear.  Yes, “vanity of vanities”…. proclaims Qoheleth (the ‘Preacher’)! Specifically, I wasn’t sure if I should wear a Roman collar, identifying myself as a Catholic priest.  I assumed that many coming to such this Gathering would consider catholic priests “one of them,” a voyeur antagonistic to all the values and virtues for which they stand.

Still, a Roman Catholic priest is what I am.  And since the only clearly Roman Catholic statement I have yet to hear about Donald Trump was proclaimed so long ago by Pope Francis, even more I think it’s important that anyone who authentically attempts to echo the voice of Jesus, is required to stand up these days in solidarity with Women, indeed, with all people and all diversities, all backgrounds, all ethnicities, all persuasions, all life-styles.  Sophia… Divinity… Mother… is a Creator who dances the joy of diversity… and in Her image we are created.

So I wore the black shirt and Roman collar, as well as a green, gold and white jacket, emblazoned with: St. Mark’s High School, 2000 Delaware Girls’ Soccer State Champions.  I was presented with that cherished gift years ago when I was teaching at the diocesan high school and assisting the boys and girls soccer teams.

I also happen to have with me a heavier, warmer jacket, another gift from St. Mark’s High School, from the Delaware 1996 Boys’ Soccer State Championship team, whose amazing squad included the kind of talent that elevated us to 13th Nationally that year, no small feat even for a team that hales from the second smallest state in the country.

But this day, no doubt about it, I wanted to do all I could to represent the Catholic Church in a way that is typically under-represented.  I hoped to shine a more authentic light on the blessing of Women.  I felt a need to publicly witness, in sorrow, to the “dysfunctional maleness” of the Roman church.  For indeed,  I owe so much to the thousands of young women (and young men!) who have shaped my priesthood for more than 30 years.  With young people, I have been blessed to be a disciple, a parent (they called me “Father”) and a proclaimer of the good news of Jesus.

The Albuquerque Civic Plaza was teeming with people: a Force potent with Life and Love and messages of Truth.  It was indeed FOR Women!  Bravo!  And thank you!  As well as men, children, dogs, and an assemblage of signs, placards, hats, costumes, colors and sounds… all swelling together into a harmony of Oneness, a Unity of Diversity, a Community that must have been what those early followers of Jesus meant when they embraced the word “catolikos.”  The signs were a virtual cavalcade of creativity, passion and power.

The speakers, the singers, the dancers, the poets… it truly was a momentous gathering.  It was so very inspiring.  Yes, I received what felt like “against” looks from a number of folks, but I must also say that a number of folks took the time to stop and thank me for being there as a represent of the Roman Catholic church.

I admit I had some small hope of seeing another priest, whether Lutheran, Presbyterian, in fact, seeing a cleric of any denomination would have been an encouragement.

Then, I glimpsed the word “priest” on a large sign.  The holder of the sign was standing on the top of a 2 foot high wall, allowing for better visibility.  I pulled out my smartphone and turned to take a picture.  At that point, I was able to read the entire sign:  WOMEN PRIESTS ARE HERE.

My heart jumped for joy… I was so humbled, so proud, so joyful!  I snapped a picture  Then, the WOMAN holding the sign smiled at me and I came toward her.  I asked if I might have a picture taken with her.  Smiling graciously, she responded, “Of course.”  Then, she nimbly jumped down to meet me at the lower level at which I was standing.  But I said, “No, I’ll come there… with you… if that’s OK?”  She hopped up again on the edge upon which she had been standing, and once more, looked down to me.  I said, “I need your help to get up to where you are.”  Again, smiling, she offered her right hand and arm and she helped to lift me up to that higher level.  I felt empowered by her welcome, her strength, her willingness to stand, side by side, with… me.

I asked a passerby if she would be willing to take our picture together.  Graciously, the woman agreed.  I asked her to take a second pic, just to be sure.  Then, the woman I was standing with, asked that same helper if she’d be willing to do it again, this time, using her camera.  Those pictures are so important to me… they are etched on my soul… images of a Truth that I’ve always longed for, a Truth that was revealed by a loving holy Spirit on that cold January afternoon in Albuquerque, New Mexico.

A few days later, as I finally began to ‘settle down’ from the amazing experience of the WOMEN’S March on Washington ALBUQUERQUE, I posted the following on my Facebook page and emailed it individually to many friends:

Being at the WOMEN’S March on Washington ALBUQUERQUE the other day was so necessary, so powerful for me.  It brought me to tears again and again.  I chose to wear a Roman collar because I wanted “Men in Black” to be represented at that gathering.  I may have received some looks of disdain.  But thanks be to God, I also received “Thank yous,”  for being there and representing that part of “the church” that they did not expect to see among them that day.

I include for you one of the pictures of the day of which I am so proud.   The woman standing with me in the picture gave me her card.  I hope to stay in touch with her, as she has allowed me a most amazing personal and spiritual experience.  The information on the card reads:

ARCWP, A Renewed Priestly Ministry in a Community of Equals.

(I have a picture of her business card which I will send to you separately).

I am only now reading the card she gave me last Saturday.  It is the first time I’ve looked at it since she handed it to me.  And the logo on the card, well, you’ll see… it’s beautiful… but what is most outstanding to me are the words surrounding the logo:  “Roman Catholic Women Priests Association.”  God be praised!  I did not know.  I “assumed” she was some “other” more progressive denomination.  I am only now realizing she IS a Roman Catholic.  And I am even more humbled…. and proud.  A Roman Catholic Woman, a PRIEST, standing up and Living this Truth.  Showing us the Way.  The Way of Jesus.   I am so in awe of what is happening.

Blessings to all my friends.   May Sophia, our Sister, our Mother, the Spirit of Life and Love, be with us all in the journey.

much love, and even more gratitude,